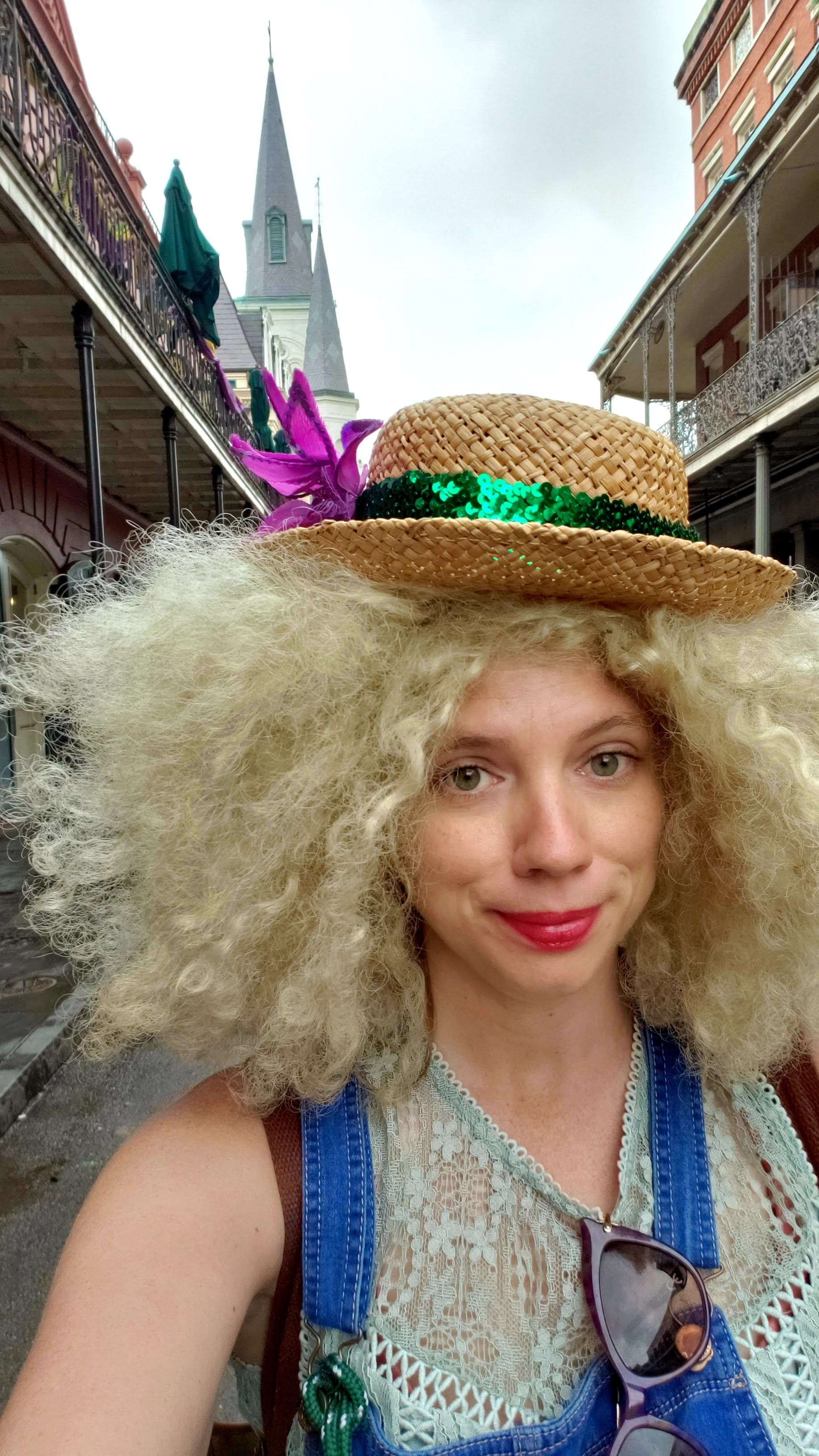 Posted at 01:27h in Uncategorized by planetcarnival

Reliable sources estimate that, since 1945, approximately nobody has ever come to New Orleans for peace and quiet. From the blare of brass bands all around the city, to the barbaric yawp of frat boys on Bourbon Street, to the cheers & curses of Saints fans in the Superdome – It’s a loud place.

In a town where “nightlife” is basically a figure of speech, many bars and clubs stay open 24/7. Even so, there are moments of calm when one can discern subtler sounds. Calliope tunes drifting from riverboats on the Mississippi. Beignets sizzling in hot oil. The clip-clop of hooves, as mule drawn carriages take tourists around the Vieux Carre. 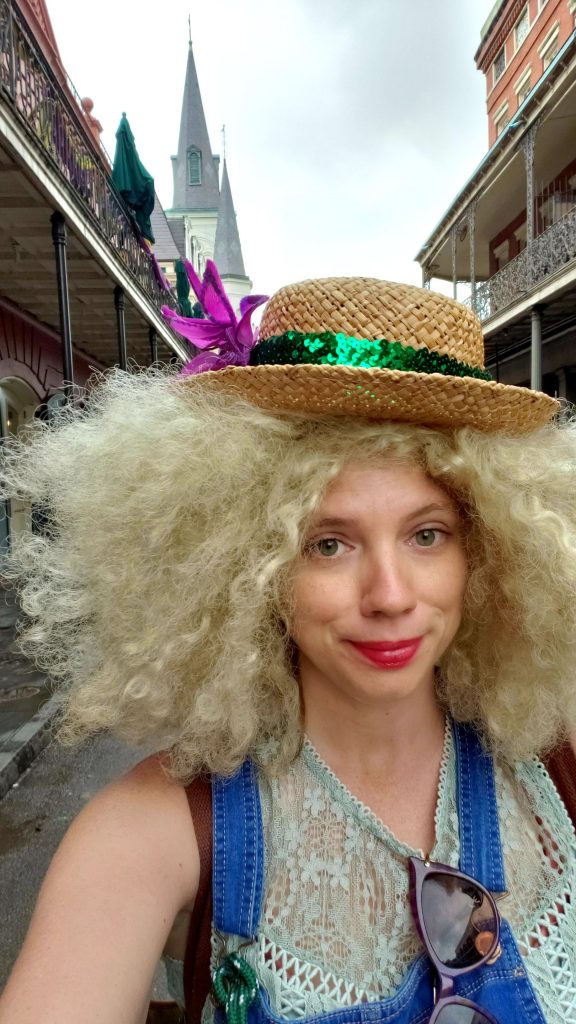 If the visitors are lucky, they may be driven by Charlotte Jones, muleteer extraordinaire, who describes herself – with undue modesty – as “Nola’s Okayest Tour Guide”.  Although not originally from New Orleans, she has a deep knowledge and abiding passion for its byways, boulevards, and oak-lined avenues. “It hit me on a unique level” Ms. Jones says, recounting her first glimpse of the place she now calls home.

At the age of 13, she and her parents passed through on their way to Texas for a Christmas visit with her grandfather. “As a teenager, I was completely enthralled by all the architecture, and even” she explains “by the grunginess of New Orleans. It was something I wasn’t used to seeing, coming from a rural area.”

The area in question is central Florida. In the realm of popular clichés, it’s hard to imagine two places with more divergent mystiques. There’s the Big Easy, dating back beyond the founding of the USA and positively dripping with “authenticity”. Then there’s the Sunshine State: a blank canvas where developers and conglomerates are free to realize their visions of theme parks, condo complexes and golf courses.

Naturally enough, Jones  takes issue with such caricatures. “Florida definitely does have a history. Not only Native Americans, but military history and the kind of agricultural history you might hear more about in places like Mississippi or Georgia.” Even so, she concedes that things like railway depots are often “overlooked by the masses. In small towns, people have some appreciation for their historic structures. But they’re not going to fight too hard if somebody wants to tear them down and put up a McMansion”.

In 2007 Charlotte arrived at the University of New Orleans to pursue a B.S. in Urban Planning, with a focus on historic preservation. 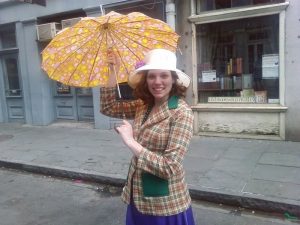 It was a tragically apt time to begin such studies. Between that initial visit with her family, and her first semester at UNO, the area had endured the chain of calamities locals simply call The Storm. In the late summer of 2005, Hurricane Katrina’s winds and tidal surge were compounded by failed and neglected infrastructure, and a botched response by all levels of government. In Washington, some policy makers suggested the most devastated wards – which were often the poorest — should be permanently abandoned. The Carnival season of 2006 saw thousands of displaced citizens living in trailers and other temporary structures, while others found themselves scattered across the country.  Yet signs posted around the city defiantly proclaimed “Nothing stops Mardi Gras. NOTHING.”

Jones completed her undergraduate degree in 2010. As recovery efforts continued, her embrace of the renowned bacchanal grew more intense. For a while, she was involved with the Krewe of Red Beans, which organizes walking parades through the Bywater and Marigny sections on Carnival Monday, or Lundi Gras. 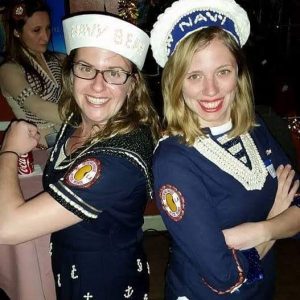 The name is a tribute to the slow-simmering dish traditionally served on laundry day in New Orleans. Members and supporters are encouraged to step in the streets wearing costumes festooned with legumes. Of the larger, more well-known parades, her favorites include Muses and Zulu. She readily admits this is not a unique perspective: “They’re a lot of peoples’ favorites for a reason”.

Ostensibly, the two groups are very different. The Krewe of Muses is an all-female organization. Founded in 2000, they typically roll on the final Thursday before Lent. By contrast, the Zulu Social Aid & Pleasure Club can be traced to the African-American fraternal organizations that formed during the nadir of the Jim Crow era. Making their public debut in 1909, Zulu is now one of only two old line krewes to parade on Fat Tuesday itself.

A common denominator is that both groups are famed for their throws. Tossed from floats, souvenirs like cups and the ubiquitous plastic beads are features of most parades. Going beyond such trinkets, Muses are celebrated for shoes: pumps, stilettos or wedges – bedazzled, spangled and highly coveted. In the hierarchy of Carnival, only Zulu’s coconuts, often painted silver or gold, carry more prestige.

Over the years, Charlotte has found herself “more willing to step out of my party comfort zone on Mardi Gras Day and gain new experiences”. In 2019, she took in the spectacle in the Lower Garden District, which has a reputation for being relatively sedate compared to some rowdy precincts. It was enjoyable, but in 2020 she expects to stake out a spot on Basin Street near Louis Armstrong Park.  It’s a place that has proven auspicious in the past.

In 2014, Fat Tuesday arrived with heavy rain and near-freezing temperatures. That did not deter Ms. Jones and her partner at the time. They came home with an astonishing 14 coconuts. “We hit the jackpot” she says, “we were very excited!”

Make no mistake. The Carnival tradition in Louisiana is deep, organic, and widely embraced by locals. Yet since the Reconstruction era, movers and shakers have not shied away from its commercial value. The multitudes who arrive for Mardi Gras each year are perfectly willing to spend hard cash in their quest for toy doubloons. This naturally benefits the carriage trade. 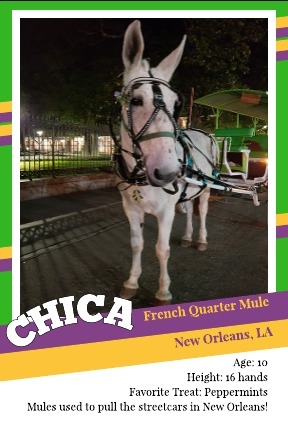 “It can be very lucrative” says Jones, “if you time it right and you’re not getting stuck in parade traffic”. Yet New Orleans is not a place that always puts profit ahead of pleasure: “Our company opts to completely shut down a couple of days before Mardi Gras day, and we’re back to work on Ash Wednesday. I’m completely on board with that”, the intrepid driver explains. “By that point, I’m ready to just have fun, rather than stressing myself out – or stressing out my mule.”

Charlotte is an employee of Mid-City Carriages, so Chica, the quadruped in question, is not her mule in a legalistic sense. Yet the two have “a pretty special relationship. I did help with training her”.  Although Chica had gone through the initial “breaking” required for any working equine, “she had some kinks to work out…it’s a lot for an animal to come to the French Quarter and suddenly be put into traffic”. That a mule (the offspring of a mare and a male donkey) might be nervous is certainly “understandable. Humans are also very nervous when they start this job. I’m very proud of the progress Chica’s made in the year-and-a- half we’ve been working together.”

Jones grew up near the town of Ocala; the thoroughbred farms in area have led the community to brand itself The Horse Capital of The World. While insisting she was “never the My Pretty Pony girl”, she rode as a teenager. This left her well prepared to take the reins in NoLa – and gives her with little patience for the anthropomorphizing tendencies of certain tourists:

“They see mules with their heads down and looking like Eeyore and assume they’re sad. Actually, they’re resting. One of the things that’s great about working with mules is that they are very self-aware, and they put their safety first. If they don’t want to work, they’re not gonna work.”

Mid-city is one of 4 licensed companies offering carriage tours in New Orleans.  They are regulated for the protection of animals and passengers, but there are no restrictions as to where they can operate within the city limits. While most visitors opt for a 30 minute tour of the Quarter, 60-minute trips are also offered. The latter includes a trek through Saint Louis Cemetery #1, resting place of Voodoo queen Marie Laveau, and the setting for the psychedelic freakout scene in “Easy Rider”.

The Charbonnet family, proprietors of Mid-City Carriage, encourages their drivers to personalize their tours in terms of routes and narration. Although they’re not booked often, Charlotte especially enjoys doing hour-long trips through the Treme neighborhood. She takes particular pleasure in telling patrons about the St. Augustine Church. Dedicated in 1842, this Catholic house of worship is not that old by Crescent City standards. Yet it is a significant monument to the gens de couleur libre – free people of color – whose  presence in the community often predated that of white Anglo-Americans. Remarkably, in the decades before the Civil War, parishioners provided pews for any slaves wishing to attend mass.

When she’s not working with Chica, Jones divides her time between Tulane University, where she’s earning a Master’s degree, and PlayBuild – a non-profit dedicated to the creation of child-friendly public spaces.  In her studies and through her work, she is acutely aware of the challenges involved in maintaining the charms of a city while insuring it remains a living, viable home for residents.

Like New Orleans, Venice is famous for its carnevale, and both cities are particularly vulnerable to climate change. In a way, La Serenissima provides a cautionary tale for The Big Easy. Only about 30,000 people now inhabit the old core of Venice’s lagoon. As natives have settled in suburbs on the mainland, historic buildings are increasingly re-purposed as hotels or holiday homes for wealthy outsiders. Things have not reached that stage in New Orleans. Yet in the wake of Katrina, thoughtful development policies are crucial to keeping it from becoming an open-air museum.

“When I say I’m a preservationist, I’m not one to say ‘Oh, those are the wrong shutters or nail screws on that building’ ” Jones explains. “I care about the urban fabric overall. There are changes that are going to happen, or need to happen, and those might not be things that an architecture and preservation group is going to be able to stop. It’s a balancing act” she says “keeping your local populations happy and economically thriving”.

Of course, few things make New Orleanians happier than Mardi Gras. “Superkrewes” like Bacchus and Orpheus are justly famed for massive, sparkling floats hauled by tractor trailers. Such joyful juggernauts are banned from the narrow streets of the French Quarter, leaving the field open for smaller organization – and floats drawn by mules. Mid-City Carriages maintain a relationship with Krewe Du Vieux.  It’s an arrangement which, in more senses than one, is right up Charlotte Jones’ alley: “We’re kind of the last connection to that old New Orleans Carnival, at least in terms of actually moving the parade along.”