The bacchanalian celebrations of The Netherlands are not as well known as those in Italy, Germany or Belgium. However, there is a long established Dutch Carnival tradition centered around Maastricht, an historically Catholic city in the southern part of country. Despite this, the North Sea Jazz Festival will inevitably evoke another hedonistic community on the other side of the Atlantic.

Jazz originated in New Orleans and the genre rivals Mardi Gras as an expression of the Crescent City’s soul. The first festival in 1976 took place in The Hague and featured such titans as Sarah Vaughn, Stan Getz, and Miles Davis. Since 2005, the event has been held in Rotterdam.

Of course, the same can be said of Nola native Troy Andrews, a/k/a Trombone Shorty. Backed by his band Orleans Avenue, Shorty will energize the crowd in Rotterdam on the 9th, before heading into France for gigs in Vienne and the Riviera resort of Antibes.

During the 2nd half of the 20th century, if you asked anybody, anywhere in the world, to name a famous Brazilian, a high percentage would have said Pele. The footballer remains an ambassador for his sport and nation, even as younger men – From Ronaldo to Ronaldinho to Neymar – have dazzled devotees of futebol.

Located in northwestern England, the great port of Liverpool may seem very far removed from the sunny beaches of Ipanema or Copacabana. However, Liverpool FC have been a perennial force in English and continental tournaments for decades. Their Merseyside rivals Everton have not amassed quite so much silverware, but their supporters’ passion is just as strong. Cariocas and Liverpudlians are united by their love of The Beautiful Game – and for samba, apparently. 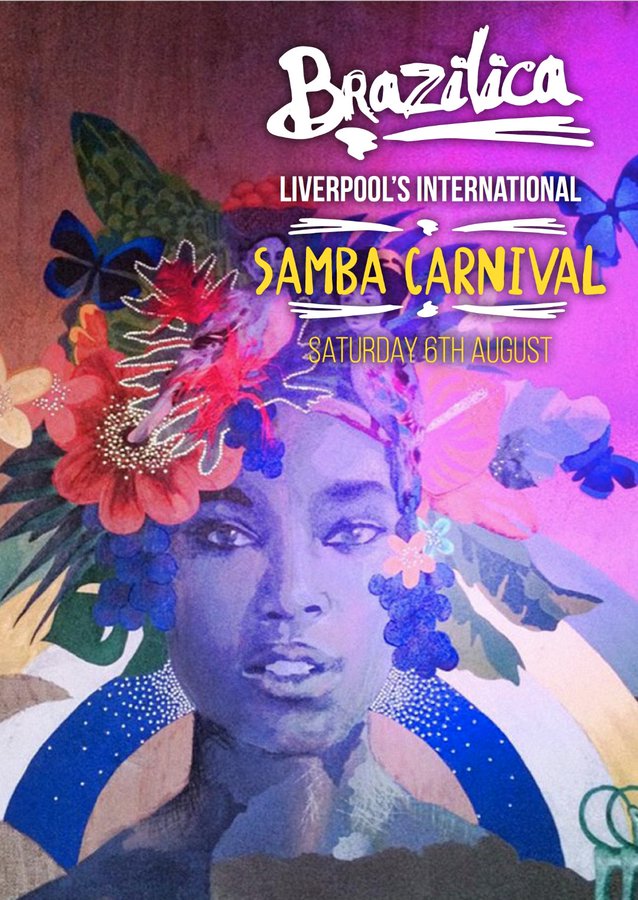 The  Brazilica Festival was founded by Maeve and Roger Morris in 2008, when Liverpool was designated as a European Capital of Culture. The procession of sequined and feathered finery was originally planned as a one-off, but proved popular enough to be a recurring affair.  After a two year hiatus, the gala will return on August 6th. Homegrown bands like Batala Mersey and the Wirral Samba Drummers will parade alongside groups from Brazil and other lands.  Kicking off around 7:30 PM, the route will proceed from Abercrombie Square to Williamson Square – with plenty of alegria along the way.

On Labor Day 2011, Jumaane Williams, a 35-year old New Yorker of Grenadian ancestry, was tackled and handcuffed by police as he walked the grounds of the Brooklyn Museum. Two years before, Mr. Williams had been elected to the City Council. Like so many of his neighbors and constituents, he went to Eastern Parkway to enjoy the annual parade organized by the West Indian American Day Carnival Association (WIADCA).

The reviewing stand for the various bands of masqueraders was directly across from the Museum. Williams insists he was displayed his government credentials and was given permission to cross the barricades from an NYPD supervisor on duty. He sustained no major injuries and, along with an aide to Mayor Bill DeBlasio, was released without charges after 30 minutes or so. Since then he has gone on to serve as Public Advocate and was a candidate in the 2022 gubernatorial race. Given the often toxic relationship between police and communities of color, his detention says a lot about what’s good -and bad- in the biggest of the boroughs.

Labor Day is traditionally seen as the last day of summer in the USA. Like other Americans, Brooklynites celebrate the long weekend with music, food and drink. Like other Americans, they do so with a risk of gun-fuelled mayhem always in the background. Williams is all too aware that horrific crimes have indeed occurred in the days leading up to the parade, but is quick to point out that “there’s violence in some of these areas every day. Focusing on one weekend doesn’t help.”

Media coverage routinely exaggerates the perils of The Parkway. Official and unofficial fetes take place at venues and homes around the city. The overwhelming majority suffer nothing worse than a nasty hangover.  But whenever somebody with Caribbean roots is involved as a villain or a victim, it is inevitably described as “parade-related”.

In addition to Monday’s procession, the program at the Museum includes a competition for Steelpan orchestras, a showcase of Carnival costumes, and concerts featuring top calypso and soca performers. Like similar events in London and Toronto, a Trinbagonian archetype is very much in evidence. Yet other Anglophone islands are represented, as well as the nations of Hispaniola and mainland countries such as Guyana and Panama.

After being cancelled in 2020, a scaled-back itinerary took place last year. In 2022, the renewed collaboration of the WIADCA and the museum – like Jumaane Williams’ political career — reflects the promise of multicultural democracy at its very brightest. But the 2011 incident, and so much that has happened since then, betray a divisive xenophobia that threatens to snuff it out.